Fire is one of several premade particle-emitting classes. Like other particle emitting objects, a Fire emits particles when parented to a BasePart an Attachment and while Enabled. This object is useful to create a quick visual effect in a pinch; for more detailed work it is preferable to use a ParticleEmitter instead.

Fire particles emit from the center of BasePart to which they are parented. The particles are emit toward the top (+Y) direction; however, a negative Fire.Heat may be used to emit in the bottom (-Y) direction. Using an Attachment as a Parent instead allows the emission position/direction to be modified by changing the Attachment.CFrame or related properties.

When Enabled is off, existing particles continue to render until they expire. However, if the Fire's Parent is set to nil all existing particles immediately disappear, similar to the behavior of ParticleEmitter:Clear(). It is possible to set the Parent to nil and back to the exact original object to achieve the same effect. If immediate disappearance is not desired, try moving the Fire's parent to some far away position, then Destroy the Fire after a few seconds using Debris:AddItem(). This will give the existing particles time to expire.

Fire objects emit no light on their own. To help create a cohesive environment around a burning object, try adding a PointLight with an orange Color. This can help your fire appear more realistic.

Fire object consist of two emitters. Both of these are affected in various ways by the Fire's Size, Heat, Color and SecondaryColor. The particles emit from the smaller, secondary emitter have a significantly longer lifetime (and rise farther) than those emit by the primary emitter. In the video to the right, you can see the two emitters with the distinct colors.

Unlike actual flames, the Fire object does not spread on its own. If you notice this behavior in your game, it is happening because of a Script.

Determines the color of the primary (outer) flame particles.

Determines whether flame particles are emit.

Determines the velocity at which particles are emit.

Determines the color of the of the secondary (inner) flame particles.

Determines the size of the flame particles.

Value between 0-1 that controls the speed of the particle effect.

In general, the cooler flames are on the outside of a fire. Therefore, fire looks more realistic if the outer portions are red or orange-yellow. A fire that is bright all throughout doesn't look very realistic, so avoid setting this property to yellow. Try adding a PointLight with the PointLight.Color as a sibling to the Fire. This will provide light to the surrounding environment and make it feel more cohesive with the flame particles.

The Enabled property, much like ParticleEmitter.Enabled, determines whether flame particles are emit. Any particles already emit will continue to render until their lifetime expires. This property is useful for keeping pre-made fire effects off until they are needed later. Since flame particles are destroyed when the Fire object's Instance.Parent is set to nil, this property is useful in allowing existing particles the opportunity to expire before destroying the Fire object altogether. See the function below.

The Heat property determines how fast particles are emit from the Fire object. It is limited to the range [-25, 25]. Positive values are in the top (+Y) direction of the parent BasePart or Attachment. It also affects the ParticleEmitter.Acceleration of the inner particles. Below, you can see the effects of higher heat on the velocity/acceleration of the flame particles (left has Heat = 9, right has Heat = 18).

This property determines the size of the flame particles. It must be in the range of [2, 30]. Unlike ParticleEmitter.Size, the actual size of the flames will not match 1-to-1 with the equivalent size in studs; it is somewhat smaller. 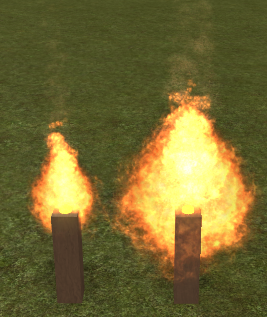 To make your environment more cohesive, try adding a PointLight as a sibling to the Fire object. Set the PointLight.Brightness and PointLight.Range proportional to this property so that larger flames produce more light.

A value between 0-1 than controls the speed of the particle effect. At 1 it runs at normal speed, at 0.5 it runs at half speed, and at 0 it freezes time.