A simple container used to hold and organize Roblox objects. Unlike other container classes like Model, it offers no additional functionality.

The Folder object is ideal for organizing and storing objects. It is not recommended to use folders to group BaseParts as Models offer a range of useful functions for moving and manipulating the parts.

Folders form part of the game's hierarchy and can be accessed the same way as any object. For example:

Folders behave the same way as folders in a computer file system, meaning they can also be parented to each other. They exist as a means for developers to better organize the multitude of objects required by complex games. See below for a simple example of how folders can be used to organize game objects in ReplicatedStorage. 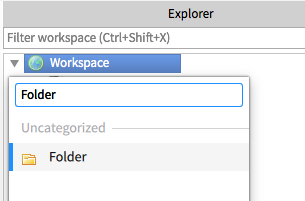