The Properties window, accessible from the View tab, allows you to adjust certain properties of a selected object to change how the object looks and behaves. Additionally, you can configure instance attributes at the bottom of the window.

When you select an object, the window's header bar changes to reflect both the class and name of the object.

The Properties window divides an object's properties into sections. For example, a MeshPart includes sections like Appearance and Collision, which respectively allow you to change its appearance and how it physically collides with other objects. 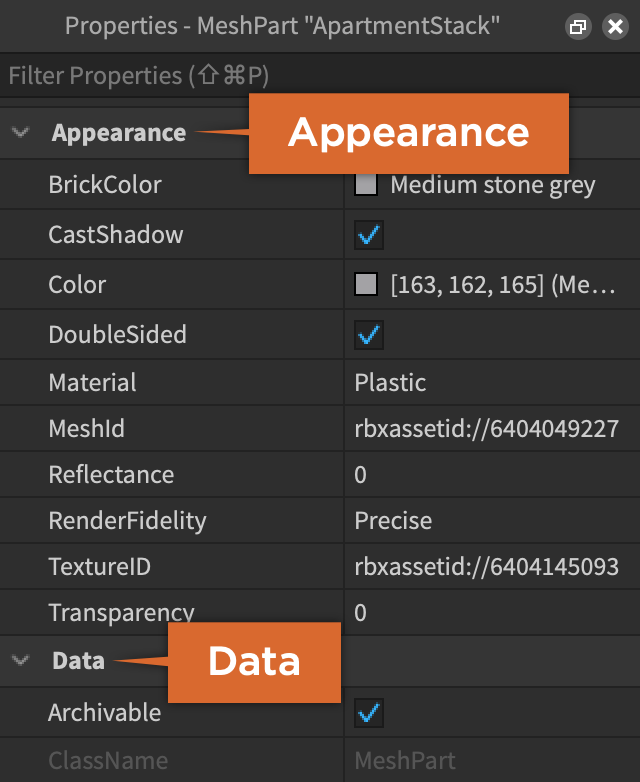 You can collapse or expand any section by clicking the small arrow to the left of its name. After you expand or collapse a section, it remains expanded or collapsed for other objects of the same class, as well as related objects that share the same property grouping. For example, the Pivot section is common to both Parts and MeshParts.

Some properties are collapsed by default, but you can expand them by clicking the small arrow next to its name. For instance, BaseParts contain a Position property which represents an X, Y, Z coordinate in the 3D world. In Studio, these coordinates can be entered in two ways:

After you expand or collapse a property, it remains expanded or collapsed for other objects of the same class, as well as related objects that share the same property.

You can filter properties by typing a search query into the Filter Properties input near the top of the window. You can quickly access this input by pressing Ctrl/⌘+Shift+P.

Attributes allow you to customize instances with your own data. They are similar to built-in object properties, but you can create and modify your own attributes for any instance. See Instance Attributes for details.