You can import custom meshes to create everything from NPCs to an animated cloth of a sail boat. We used the custom setting of the Avatar Importer to bring in more exotic custom characters, like the mysterious black hole creatures and the friendly, if unaware, service droids.

The following sections go over how we used rigging, skinning, PBR (surface appearance), and VFX to build one of our more complicated characters that we named the "Creature." We wanted it to glow, emit some light, have trails of particle smoke, and a fluid motion that involved skinning a rig with enough joints to create the convincing waves of its tentacles. 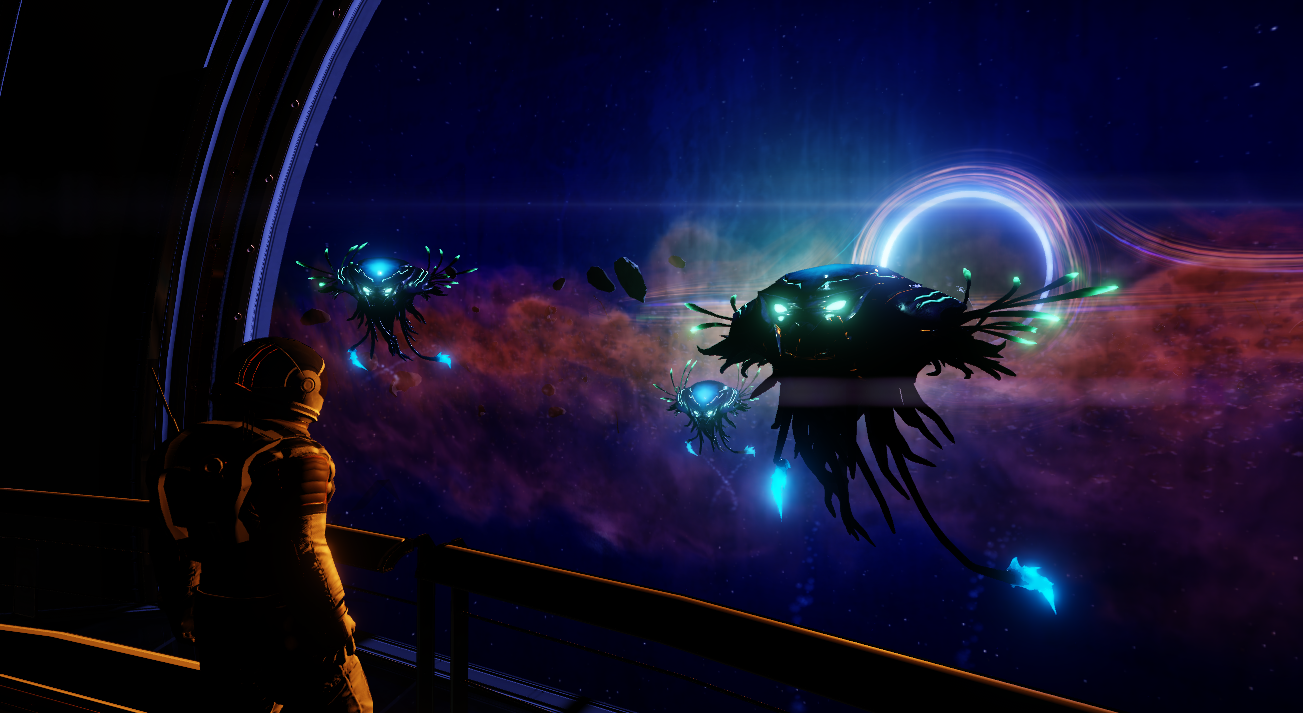 When we were rigging the Creature, we found it best to model the character in a neutral pose, because that pose is best suited to bending in multiple directions. If we modeled the Creature with its tentacles already curled, it would have led to stretching if we animated the tentacles to bend in the opposite direction. The following screenshots show the Creature in its natural state: 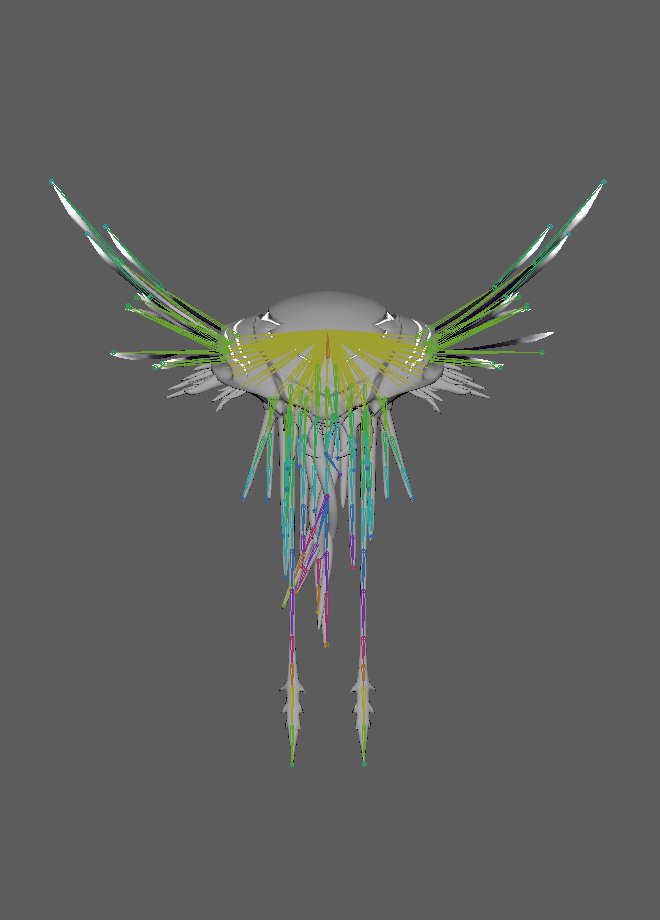 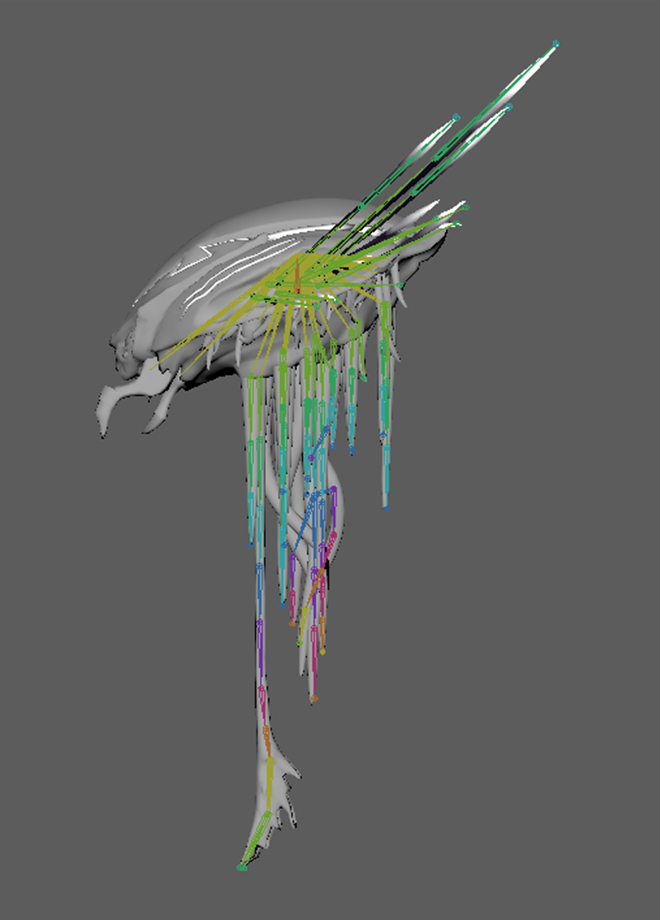 From a neutral pose, we added joints economically, focusing on the areas that needed the most movement. The fewer joints the better, because you'll have to manage them when skinning your character, and you'll have less to control when you animate them. In the previous screenshots, the Creature looks like it has a lot of joints in the center, but the main body only has one joint.

Most of the other joints are towards the tentacles and mandibles. With the tentacles, we wanted a lot of secondary motion, or motion that is layered, to create a convincing effect that they're all moving on their own. However, the center mass of tentacles were so close together that it felt wasteful to make joints for all of them, both on performance and effort to animate. So instead, we treated the center mass as a single large tentacle with smaller "tails" where the tips left the center mass. 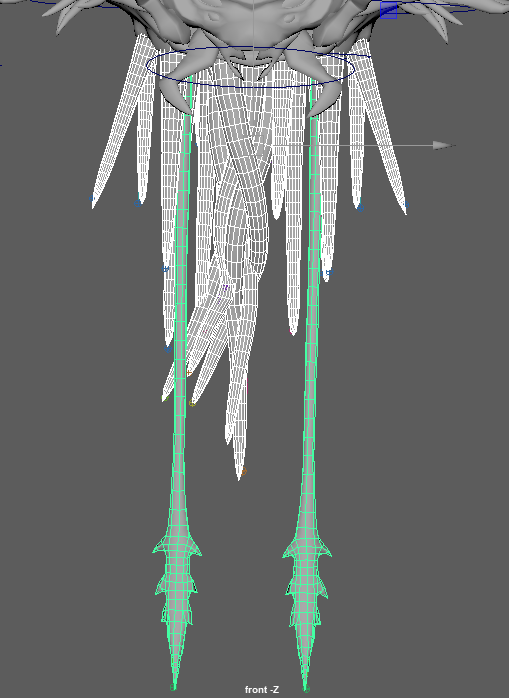 It sometimes helps to make a "control rig" that saves you from having to animate every joint by hand. You can search for excellent tutorials of control rigs appropriate for your character and corresponding DCC application.

We found the following guidelines useful, so that the character mesh imports correctly into Studio:

When we finished the Creature's skeleton, the next step was to skin the mesh. Skinning can be an arduous task, so to make matters easier, it's best to be familiar with the different initial skinning settings of your DCC application to find the one you like. Since this is an organic character, we skinned it with plenty of falloff on each joint and overlap between them. This way, the bending feels smooth and not sharp. The following screenshots show bad skinning and smooth skinning respectively:

We found the following guidelines produced the best outcomes for skinning:

Importing the Mesh to Studio

Importing your custom characters into Studio is one of the more exciting parts of the process, because you get to see your creations in the experience you're building!

To import the mesh into Studio:

Once the Creature's model was stable and didn't require any more immediate import into Studio, we started putting together the SurfaceAppearance objects, lights, and visual effects. We did this to ensure that the quality of the model was good enough before proceeding to place and edit any one aspect of it. 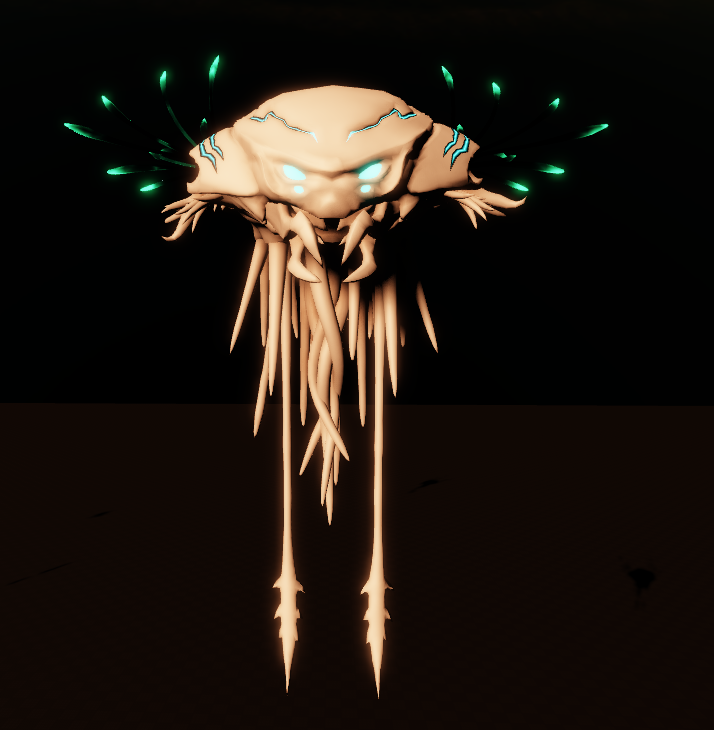 We knew we wanted the Creature to be dark, and the focal points to be the eyes and its "grabby" tentacles. High points of contrast tend to attract attention, so having a few strong ones ensure the viewer knows what to focus on. Studio supports neon materials that self-illuminate, so early on we separated the eyes out so they could be their own material from the rest of the character. We did something similar for the tentacles, so they would glow on their tips only. 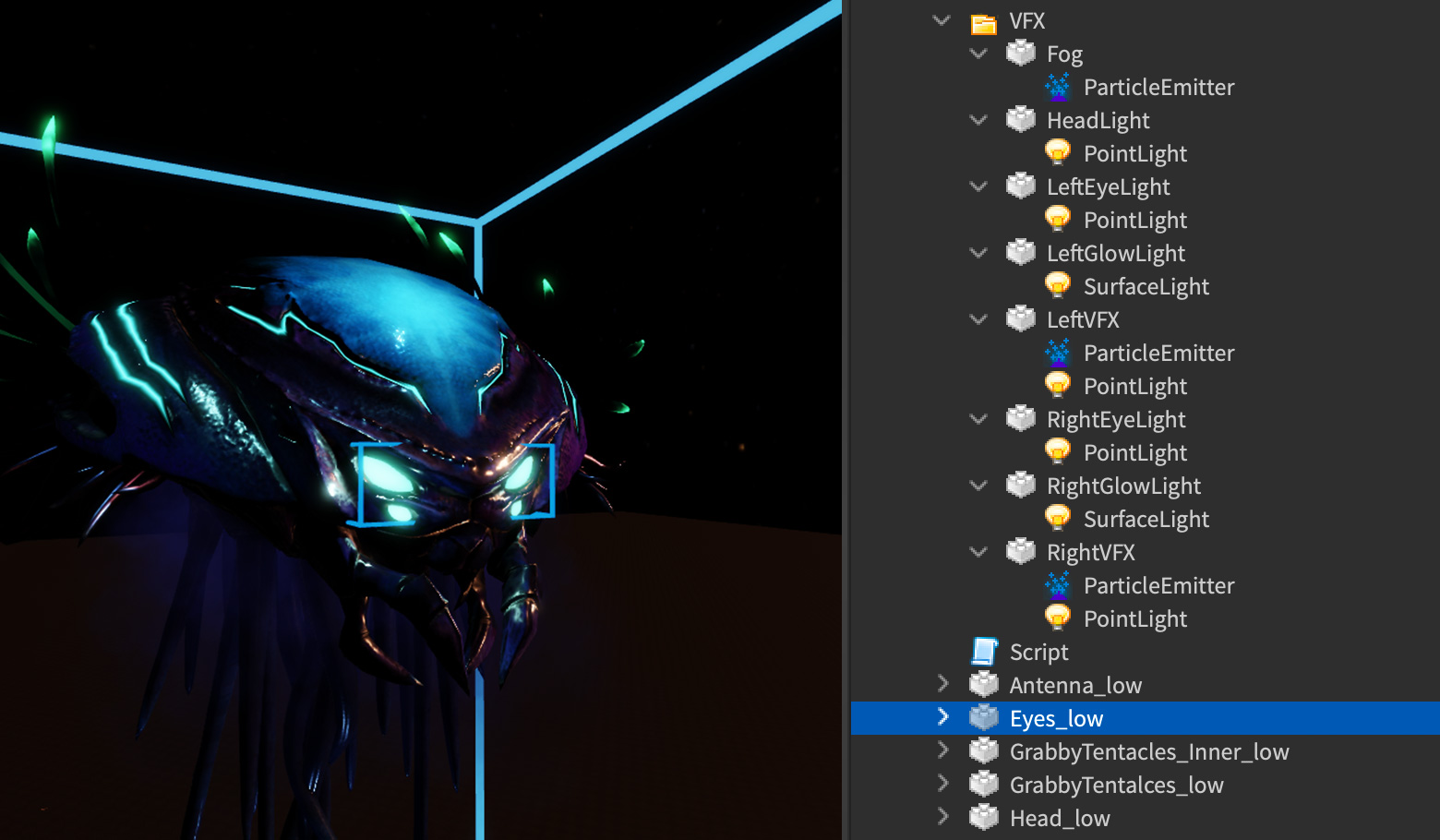 Neon material doesn't emit actual light, so after some testing, we added separate parts to control placement and direction of light emission. This ensured the lighting was directed in a manner to enhance the glow of the eyes and also project its own source of light. 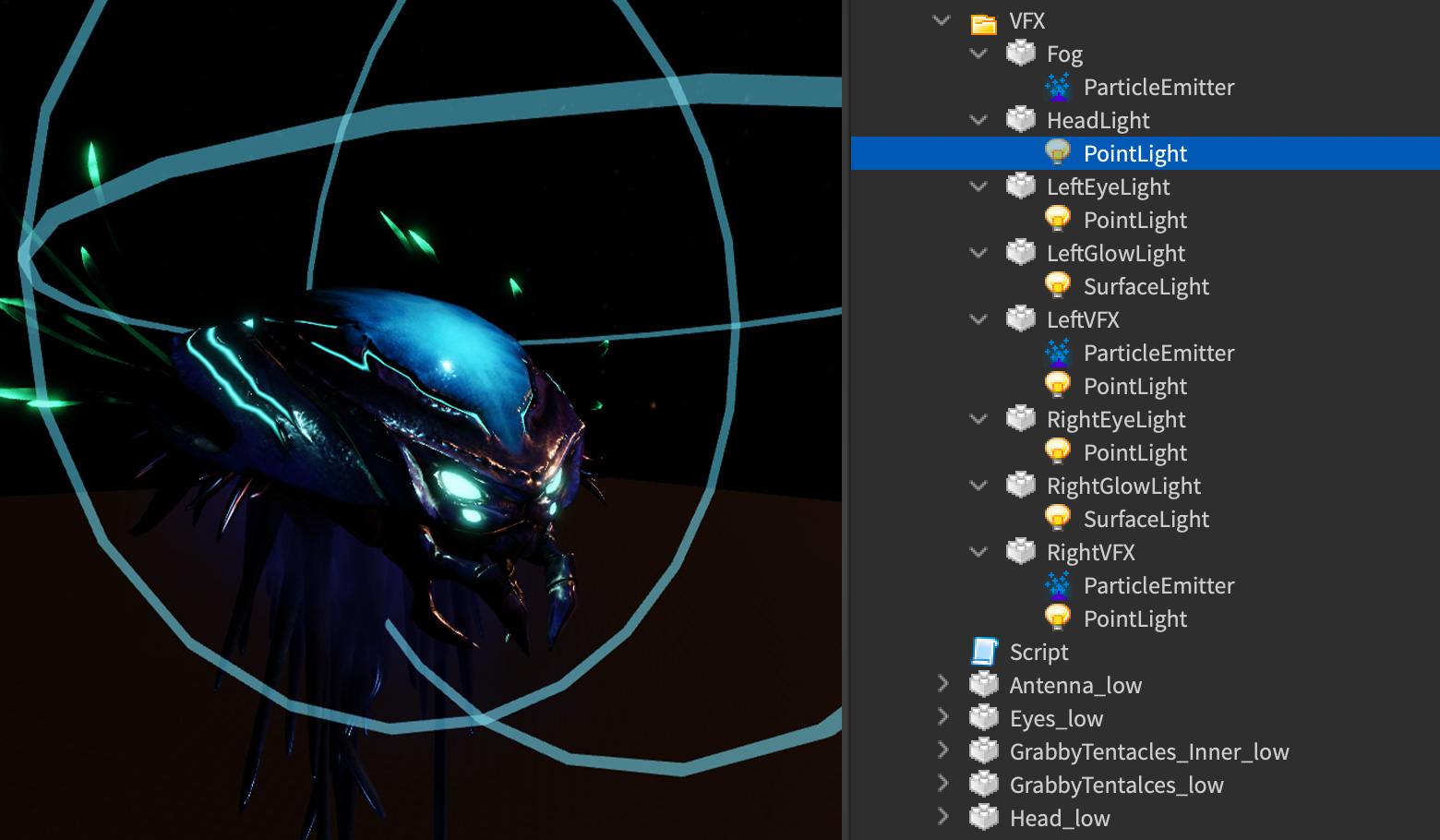 Notice that the SpotLights add visual flare to the Creature close to other surfaces or a player. 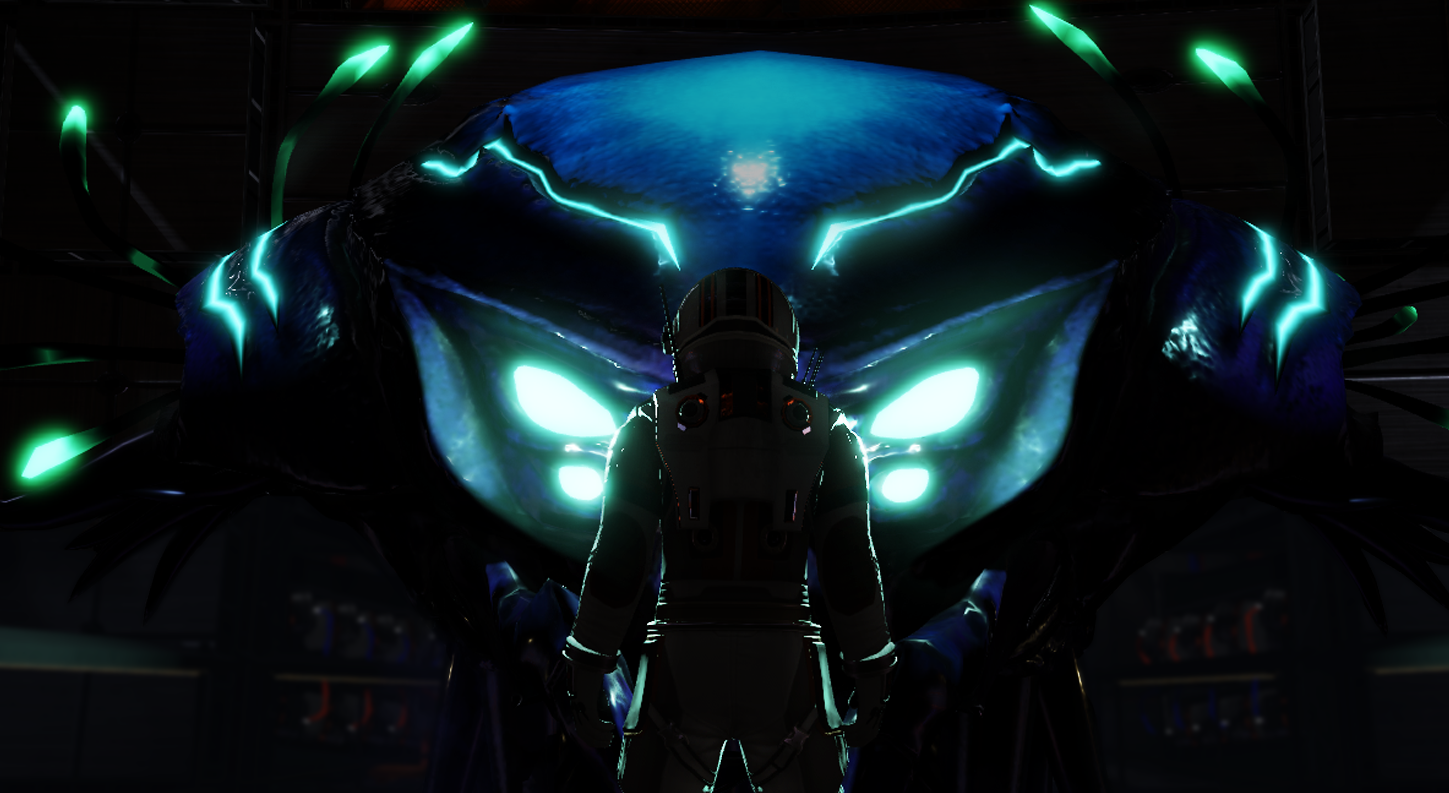 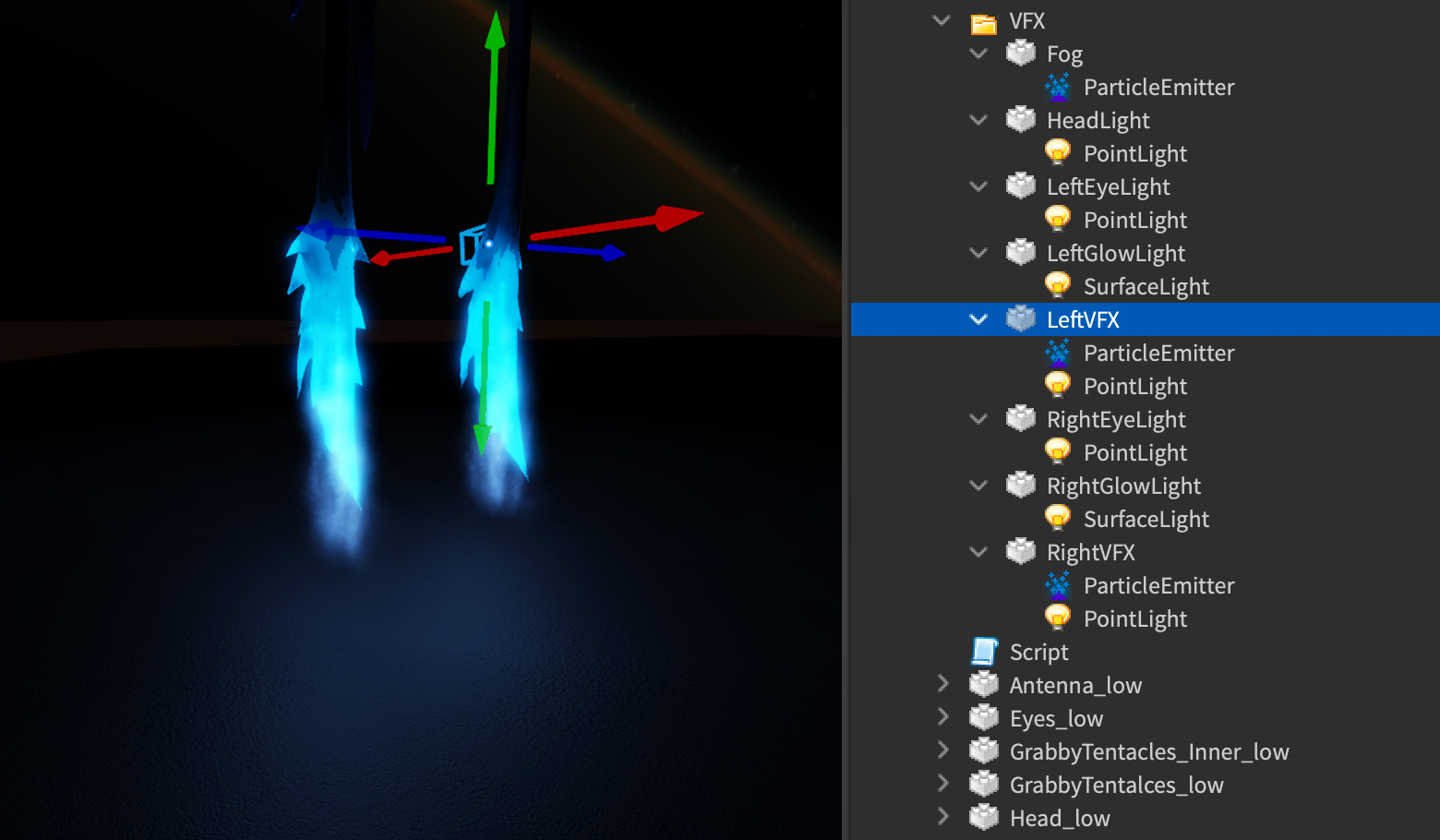 The skinned character's mesh positions aren't updated when the Creature animates, so we needed a method to make sure the VFX, SFX, and lights all followed the Creature properly. To accomplish this, we created a VFX controller script and used CollectionService to inform the parts that contained the VFX where the creature's bones were and to follow them.

Next, we set up the PBR (Physically Based Rendered) texture maps. These powerful bitmaps give the creature the varied sheen and surface variations to make it look like it has a lot of small bumps and imperfections. This visual effect helps sell the appearance of the Creature when it's closer to the player. 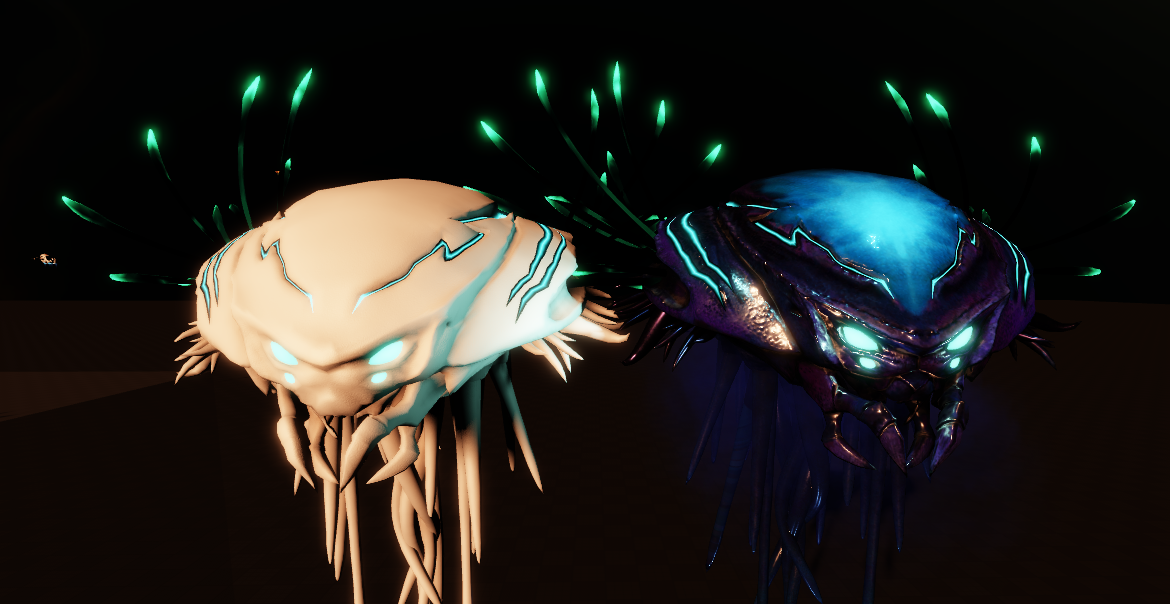 Here's how we created the surface appearance texture maps:

As we mentioned earlier, we wanted to make sure we had enough joints for fluid motion as well as enough limbs, so the creature animation felt natural and "layered." Layering, also known as secondary motion, is something you see in everyday life — when you throw your arm out, every joint is reacting to the initial impulse from your upper arm, and every joint in your body doesn't move or rest at the same time.

We used this technique to animate the Creature to feel like the limbs were reacting to the movement driven by its body as shown here:

If using an external DCC application for animation, we found the following guidelines work best:

Because we animated the character outside of Studio, we needed to use the Animation Editor to import the animation .fbx file. The editor lets you select any avatar with joints or motors and drive them via points in the timeline.

To import an animation:

After a few finishing tweaks to colors, light brightnesses, and some more particle effects to give it a stronger halo effect in front of windows, here's the final result in the space station! 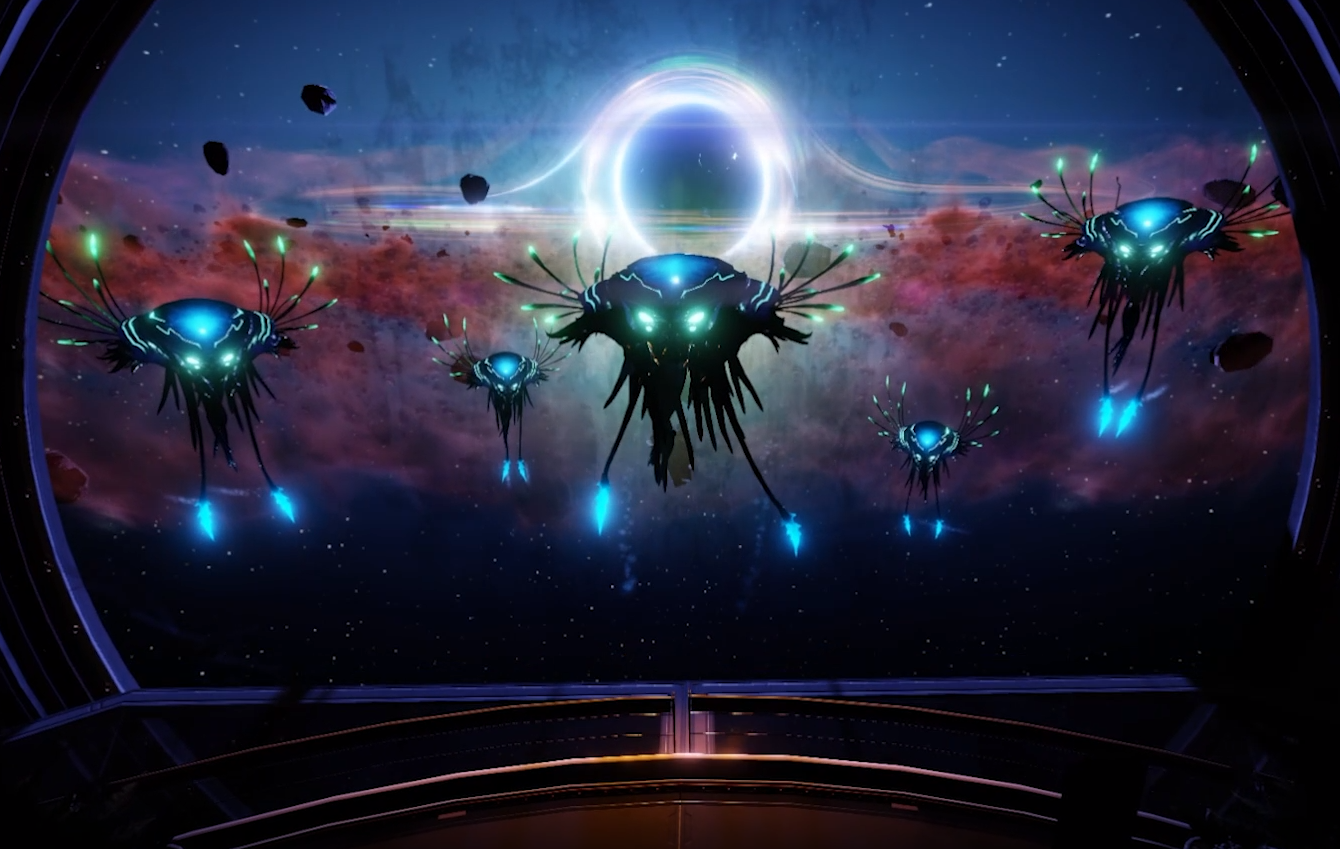