When you're learning about game geometry on Roblox, you might see the phrases object space and world space in Vector3 and CFrame functions. These terms refer to different kinds of coordinate systems, or ways Studio defines an object's position within your experience. This article details how these two terms relate to each other within Roblox development.

Think of world space like yard lines on a football field. The yard lines never move and they act like coordinates: you can use them to find where a player might be standing on the field.

When working with positional data in code, it is very useful to first translate positions and directions into world space first. Use it as a basis for solving any geometry problem you come across! 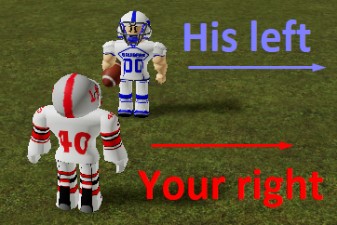 In this sense, when we talk about the "ownership" of a direction ("his left"), we're actually saying "According to him, that direction is called left." From a different perspective, or in a different object space, what he calls left you might call right. However, both are talking about the same direction expressed in different ways.

A Vector3 can be used to store positional (3D point) and directional data (3D vector), as each use X, Y and Z coordinates. It is important to recognize which of these a Vector3 represents. Usually, this is indicated by where it comes from:

Functions used to translate coordinate data from object space to world space reside in the CFrame data type. For each of these, the CFrame on which you call the function should represent the CFrame of the object in question.

In these, we'll continue with the football example: the red team player and blue team player are trying to catch a thrown football. We have the CFrames of each: