A ParticleEmitter is an instance that emits 2D images (particles) that look and behave for the duration of their lifetime according to the particle emitter's set properties. You can customize a particle emitter's properties to create special effects like fire, smoke, and sparks.

In addition, the EmissionDirection property determines the face of the part that will emit particles. When you change this property, you consequently change the particle emission direction as well. By default, this property is the top of the part, but you can change it to any face. The following video shows the emission direction changing from the Top face to the Left face to the Front face:

To create a particle emitter on a given part:

You can change the properties of particle emitters to create interesting visual effects such as glowing portals, green billowing smoke, or vibrant explosions.

The Texture property renders the image that each particle displays. By default, particle emitters have particles with a white sparkle texture, but you can change it to any texture to achieve interesting effects. The following video shows three similar particle emitters with different set textures:

When you are creating a texture to use as a particle, consider these best practices:

For steps on how to import an image for use as a particle texture, see Importing Assets.

To insert an image into a particle emitter:

The Lifetime property sets the lifetime of a particle in seconds. You can set this property either as a consistent value or provide a minimum and maximum range from which a random lifetime will be chosen for each particle. The maximum lifetime a particle can have is 20 seconds.

The Color property tints the particle's texture to either a specific hue or a ColorSequence data type. A color sequence changes a particle's color across its lifetime.

To set particles to a specific hue:

The Size property sets the stud size of each particle either as a consistent size or a NumberSequence. A number sequence changes a particle's size across its lifetime; it starts at 0, the start of emitting, and ends at 1, the lifetime of a particle.

To set particles to a specific size:

The Transparency property sets the opacity of each particle either as a consistent opacity or a NumberSequence. A number sequence changes a particle's opacity across its lifetime; it can range anywhere from 0 (totally opaque) to 1 (fully clear). For details on how to set particles to either a specific opacity or to a number sequence, follow the instructions in customizing Size.

The Transparency property is one of the most vital properties of a particle emitter. Fading particles near the start and/or end of their lifetime avoids a popping in/out effect and provides a more realistic effect.

The SpreadAngle property has an X and a Y value which determine the range of angles from which a particle can emit. The range is calculated from both sides around the axes; for example, a value of (45, 0) emits particles from 0° to 45° away from the EmissionDirection across the X axis.

The Shape property sets the shape of the particle emitter to either a Box, Sphere, Cylinder, or Disc.

After you select a shape for your particle emitter, you can experiment with the ShapeStyle, ShapeInOut, and ShapePartial properties to further customize particle emission.

If you add a particle emitter to an Attachment, the sphere and cylinder shapes will not display correctly.

The ShapeStyle property sets the emission type to either:

The ShapeInOut property sets the emission to:

The ShapePartial property is a factor you can use to determine cylinder, disc, and sphere shapes.

For cylinders, ShapePartial multiplies the radius of the cylinder on the side of its EmissionDirection.

For discs, ShapePartial inversely multiplies the inner radius of the disc.

Particle flipbook textures let you animate a particle's texture over its lifetime. The following video shows a flipbook that loops over the four particles in its texture. 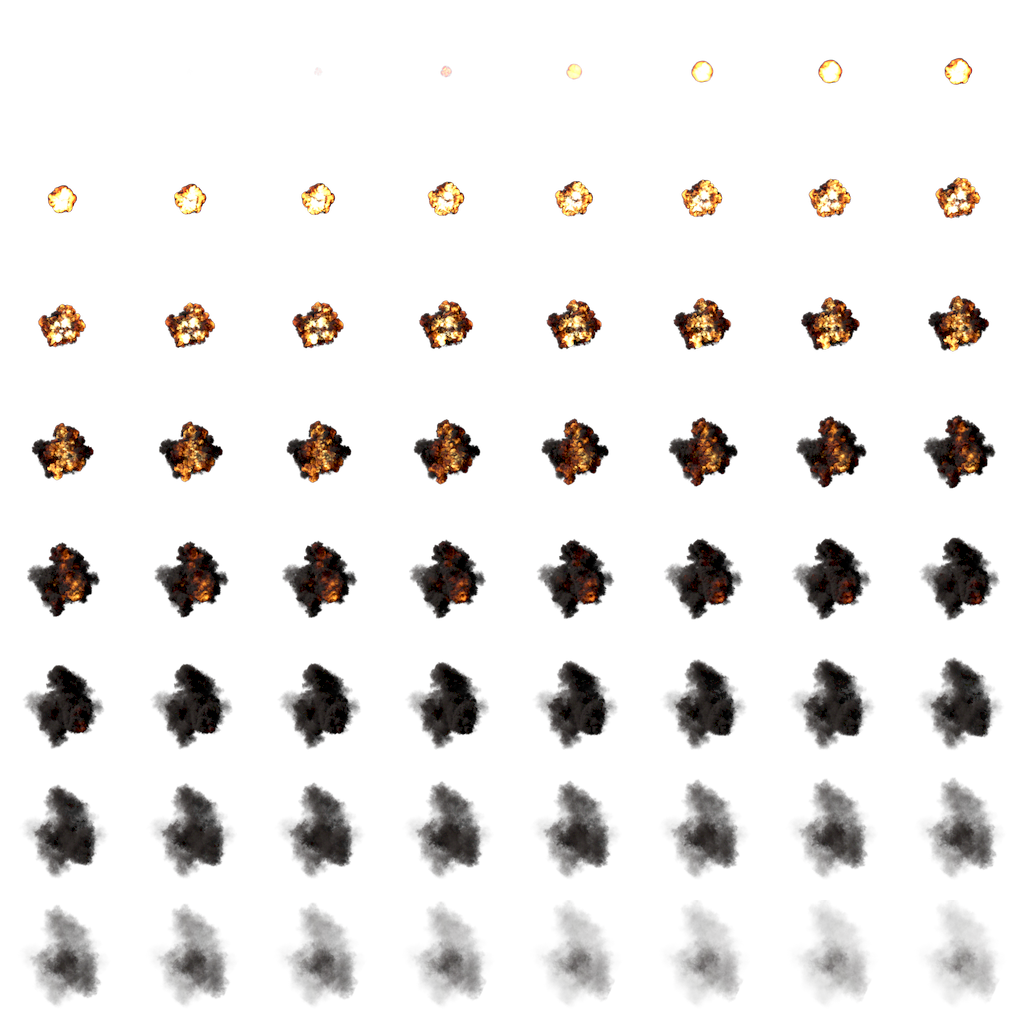 When you create a flipbook texture, include spacing between each of the particle frames. Mip filtering issues might lead to needing larger spacing. The previous image has transparent spacing around each particle frame in the flipbook particle texture.

Features with custom textures such as flipbooks cost memory to render. If you use many flipbooks with other features that use high memory, then clients automatically deactivate flipbooks when they are low on memory, which is likely for older mobile phones. To reduce the memory usage of flipbooks, use fewer unique animated particle effects or choose a texture of smaller resolution when possible. Reusing textures costs less memory than using unique textures.

The FlipbookFramerate property determines how fast the flipbook texture animates in frames per second. Like Lifetime, you can set a minimum and maximum range to randomize the framerate of the flip book, with a maximum of 30 frames per second.

The FlipbookMode property determines the type of the flipbook animation. The property can be any value of the ParticleFlipbookMode enum:

The FlipbookStartRandom property determines whether each particle begins at a random frame of the animation instead of always starting at the first frame. One use case is to enable this property and also set FlipbookFramerate to zero, causing each emitted particle to be a static frame chosen randomly from the flipbook texture.

For a complete list of emitter properties, see the ParticleEmitter API reference.

You can create explosions by pairing a particle emitter with a LocalScript that triggers a burst of particles when a user steps on an object.

To create an explosion: