The Humanoid instance is used to create character models, both for user avatars and NPCs. When a Humanoid is present inside a Model that contains a part named Head, Roblox displays a name and/or health bar above that part.

Through various Humanoid properties, you can modify the following:

As noted in the introduction, character name/health display requires that the Humanoid instance is inside a Model and that the model contains a BasePart named Head. Both objects must also be at the same level in the model's hierarchy.

The Humanoid.DisplayDistanceType property sets how users see the name/health of other characters in relation to their own character.

In the following scenario, the user's character (Viewer) has a larger NameDisplayDistance than HealthDisplayDistance, as indicated by the circles. As a result, the user sees character names for both Watchman and Octavia, but only sees a health bar for Watchman. 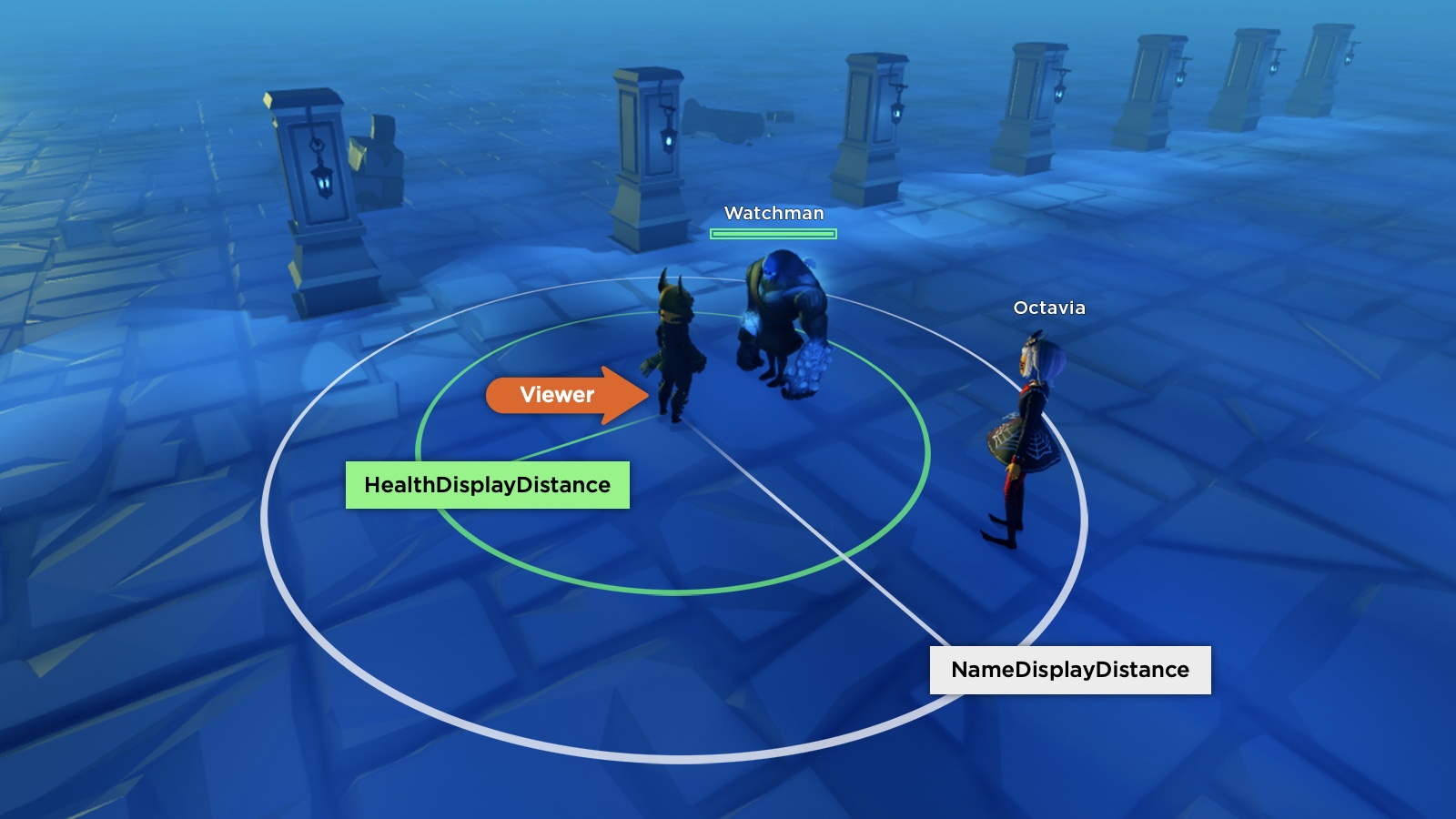 In the following scenario, both Watchman and Octavia are set to Subject and their NameDisplayDistance ranges are indicated by the circles. Only the name Octavia is seen by the user whose character is standing inside her range but outside the Watchman humanoid's range. 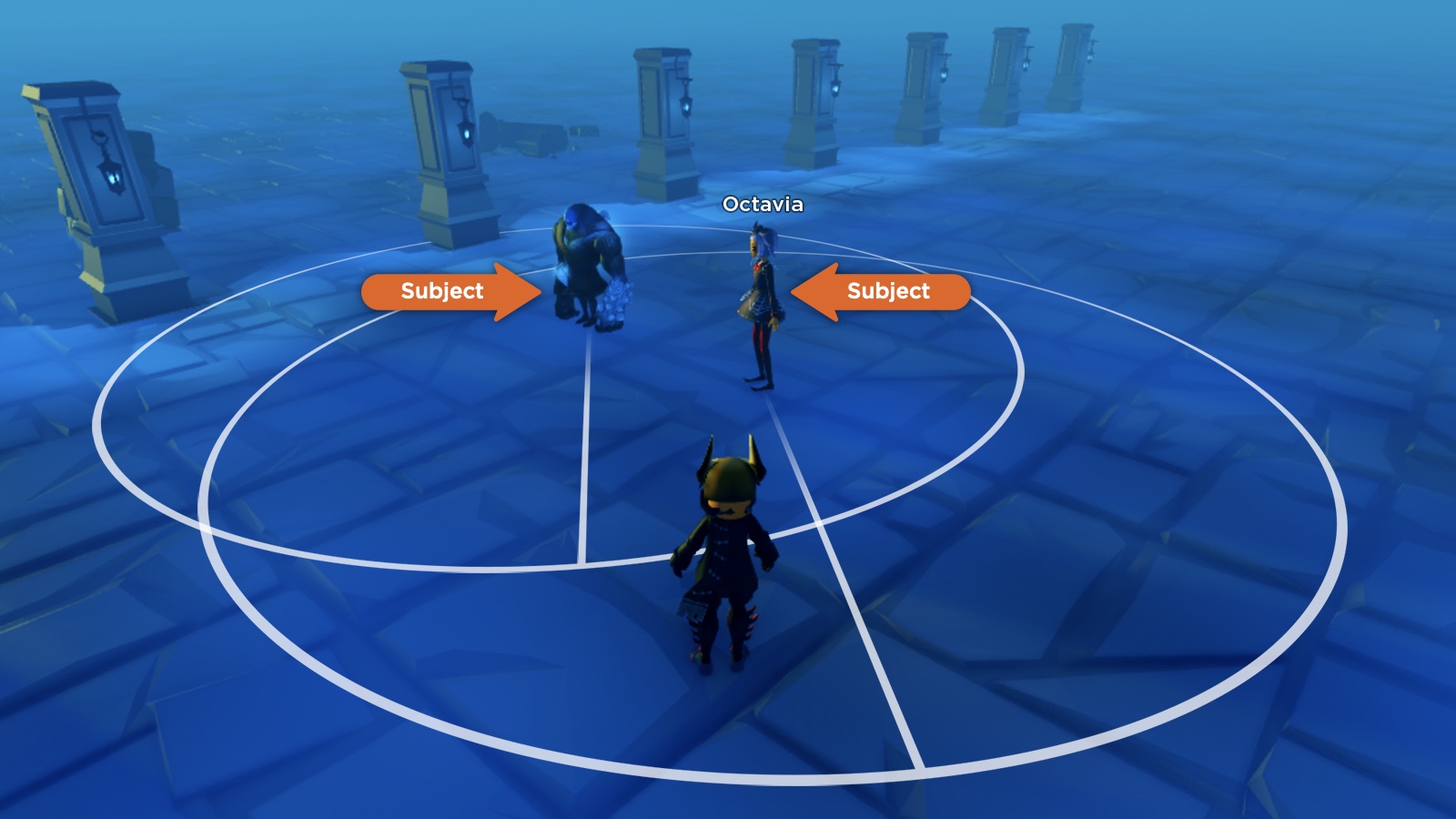 When a humanoid's DisplayDistanceType is set to HumanoidDisplayDistanceType.None, its name and health bar do not appear under any circumstances. In the following scenario, both Watchman and Octavia are set to None, so the other character does not see their name or health even when in range. 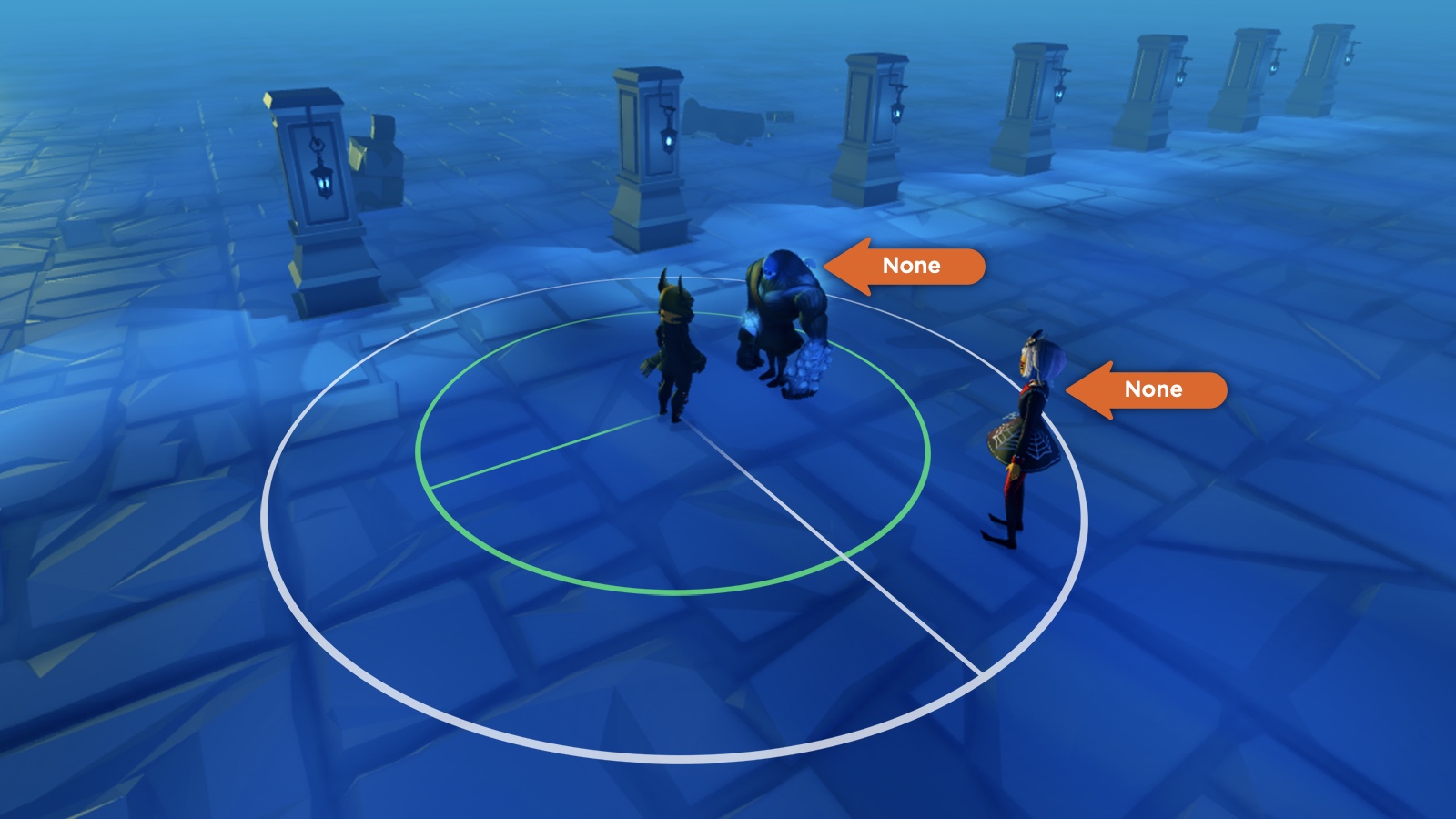 The Humanoid.HealthDisplayType property provides further control over the character's health bar visibility. The bar reflects the humanoid's Health as a factor of its MaxHealth and it changes color from green to yellow to red as the humanoid's health decreases. 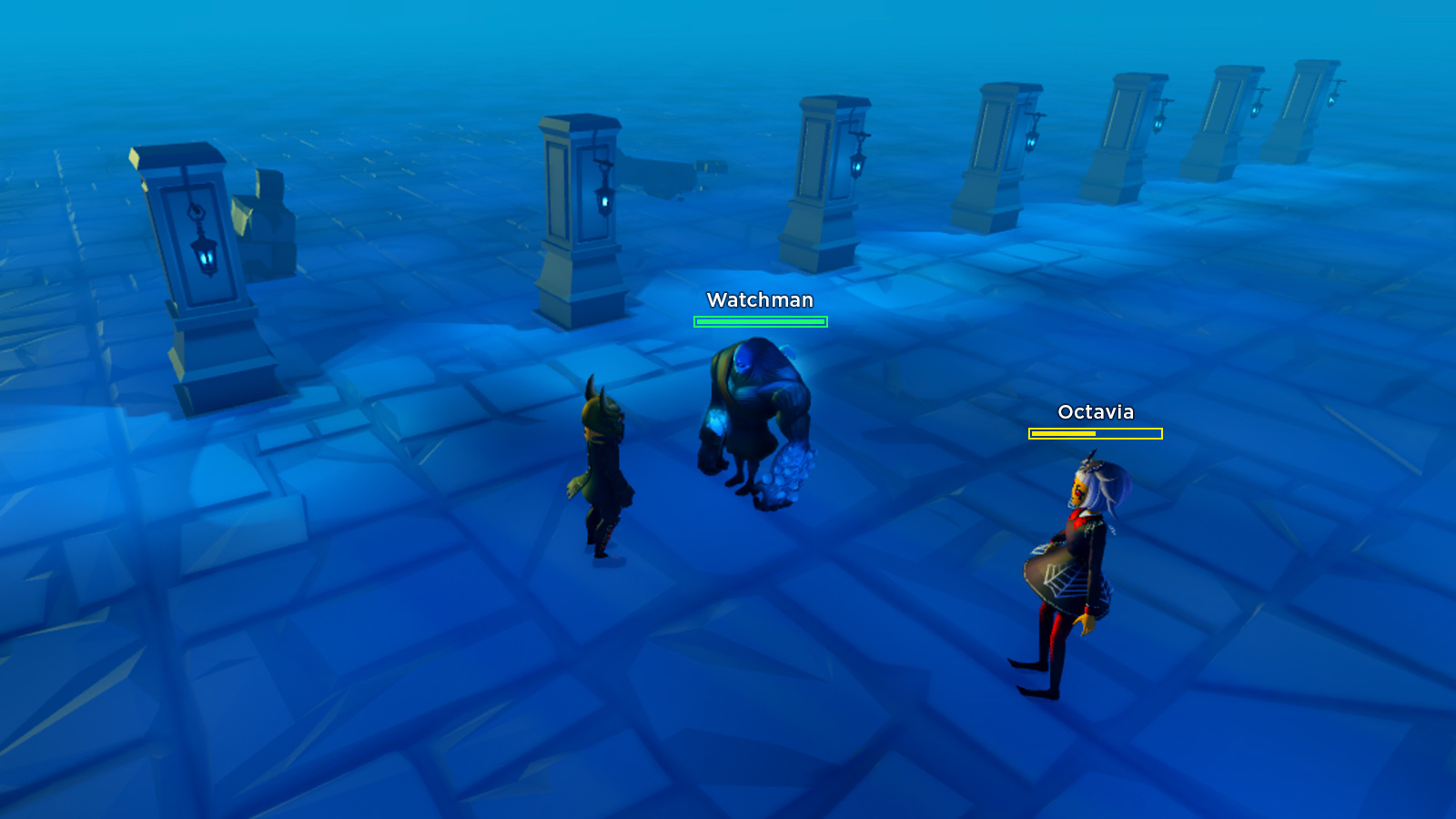 A humanoid with HealthDisplayType set to HumanoidHealthDisplayType.DisplayWhenDamaged only shows a health bar when its Health is less than its MaxHealth. In the following scenario, Watchman has full health and does not display a health bar, but Octavia is damaged by 50% and displays a yellow health bar. 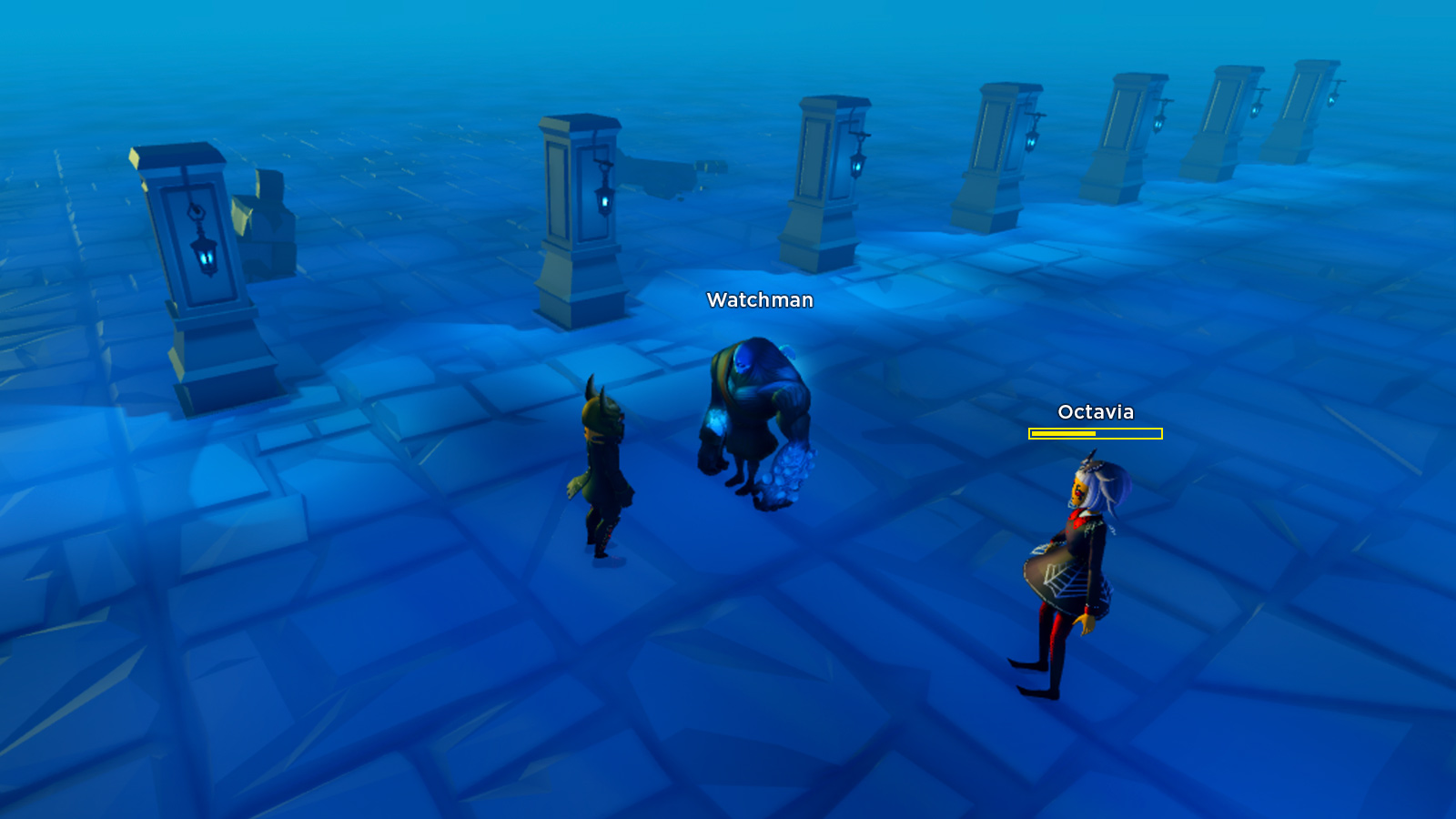 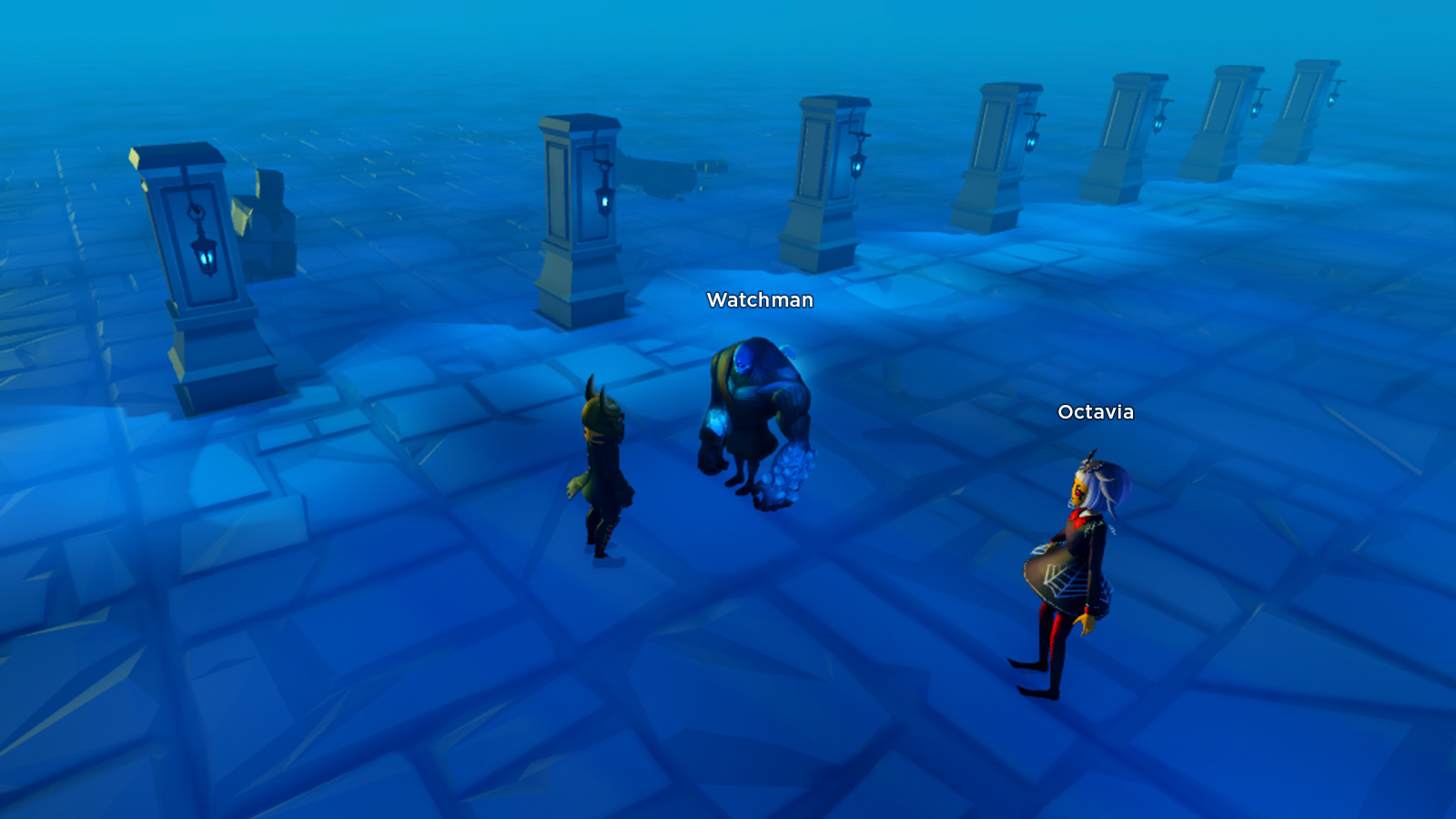 Occlusion (hiding) of humanoid names behind walls or other objects is controlled by the character's Humanoid.NameOcclusion property.

Occlusion does not occur if the occluding object's Transparency is higher than 0.99. Occlusion also does not occur when a humanoid is hidden behind a Model containing a Humanoid, such as another user's avatar character.

When a humanoid is hidden behind a visible object and its NameOcclusion is set to NameOcclusion.NoOcclusion, its name and health are never occluded from viewing humanoids.

In the following scenario, both Watchman and Octavia are set to NoOcclusion. Although both are sufficiently hidden behind stone columns, the viewing humanoid still sees their name/health displays. 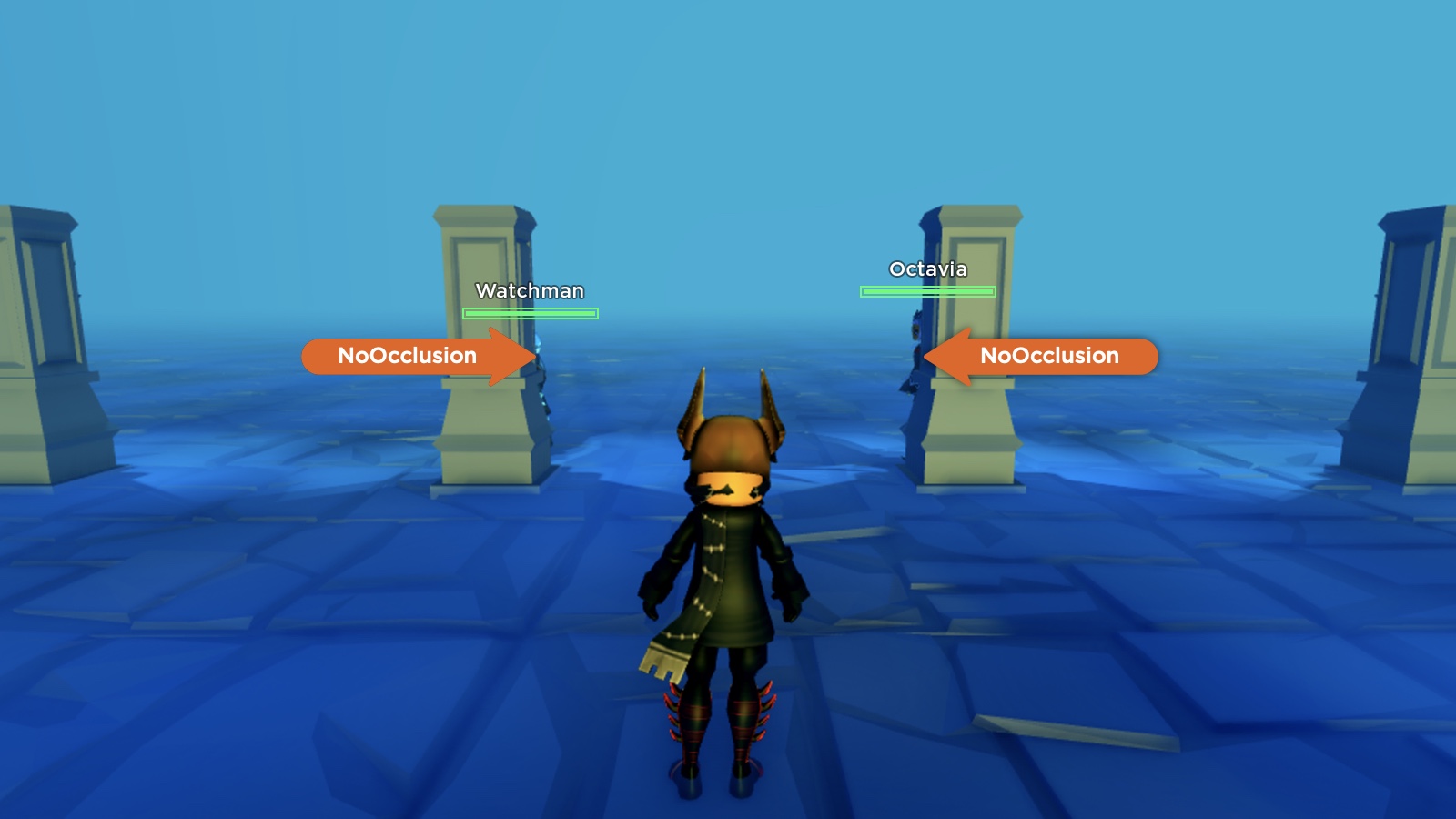 When a humanoid is hidden behind a visible object and its NameOcclusion is set to NameOcclusion.OccludeAll, its name and health are always occluded from viewing humanoids. 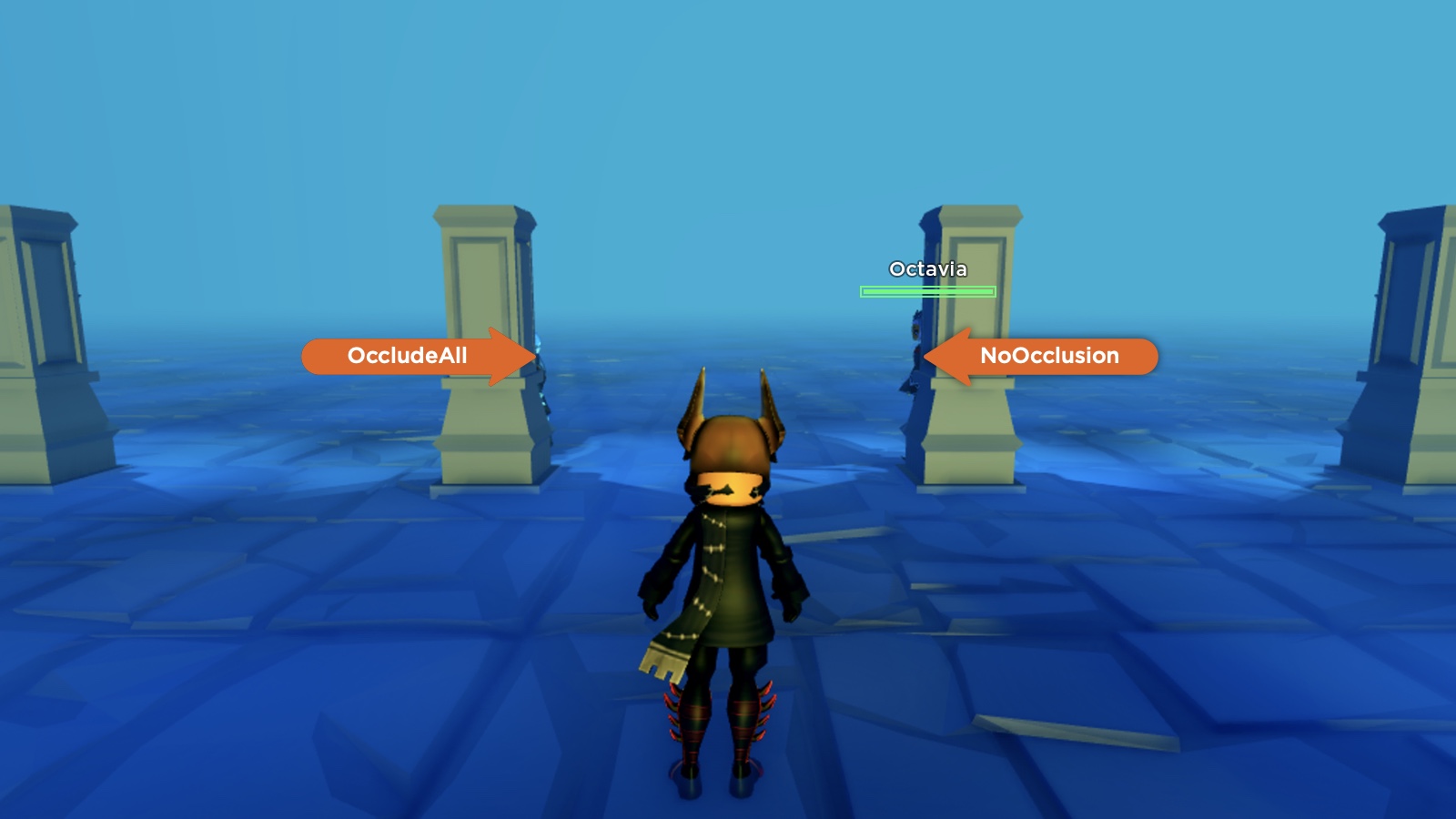 When a humanoid is hidden behind a visible object and its NameOcclusion is set to NameOcclusion.EnemyOcclusion, its name and health are only occluded from enemy humanoids (players on a different Team).

In the following scenario, both Watchman and Octavia are sufficiently hidden behind stone columns, and both are set to EnemyOcclusion. The viewing humanoid and Watchman are on the same Team, so name/health occlusion does not occur. However, the name and health of Octavia, on the opposing team, are occluded. 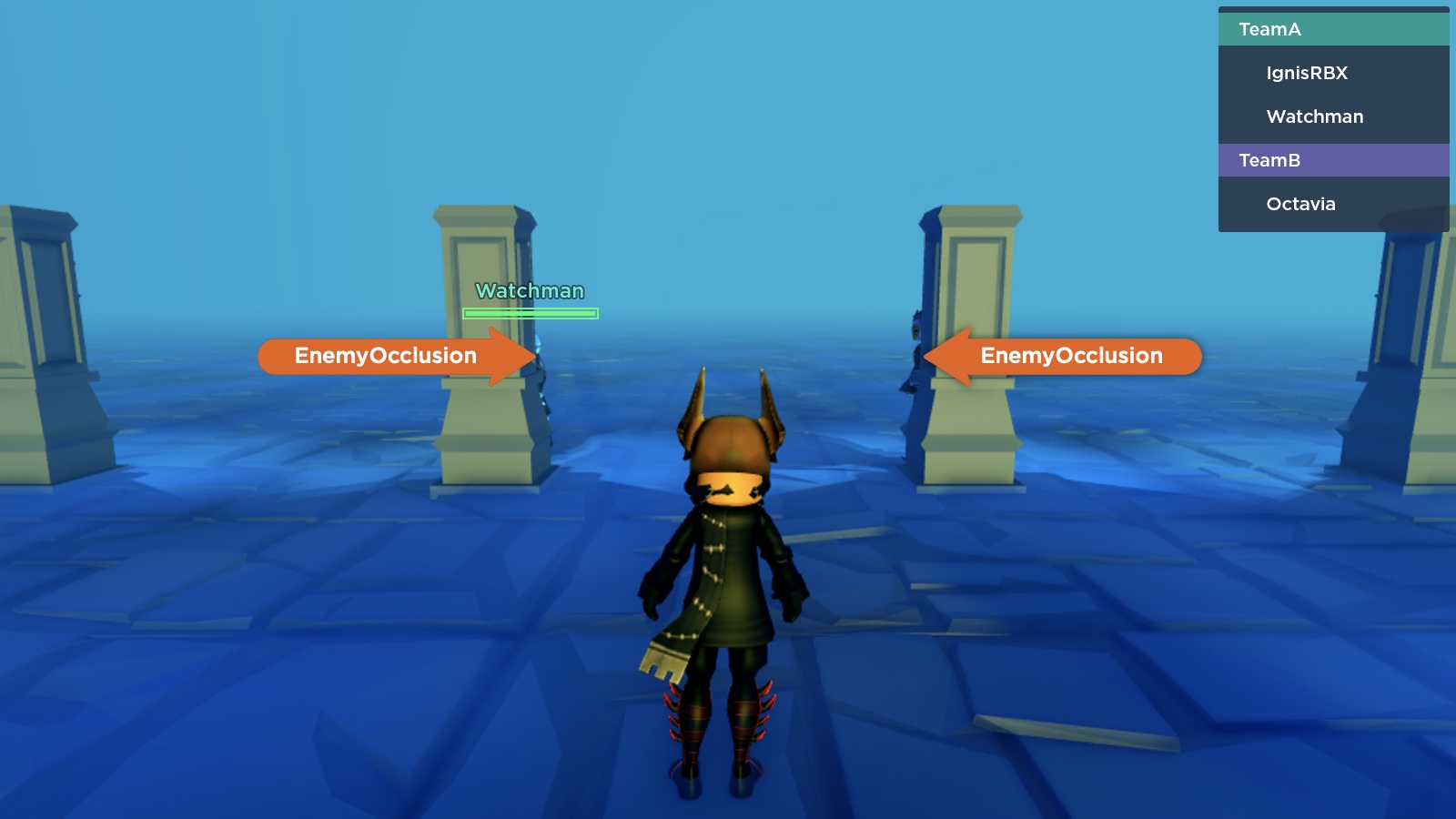 To modify the name or health display for every incoming avatar in an experience, connect the Players.PlayerAdded and Player.CharacterAdded events in a Script and set display properties on the character's Humanoid.

You can also customize properties based on a player's Team, such as setting all "guard" players to a generic name, and hiding the names of all "ninja" players.

When a player is assigned to a Team, their character's name appears in the same color as the team's TeamColor. This helps identify teammates and opposing players in team-based experiences.

For NPC characters already placed in the 3D world, you can edit name/health directly on the Humanoid object in the Properties window. 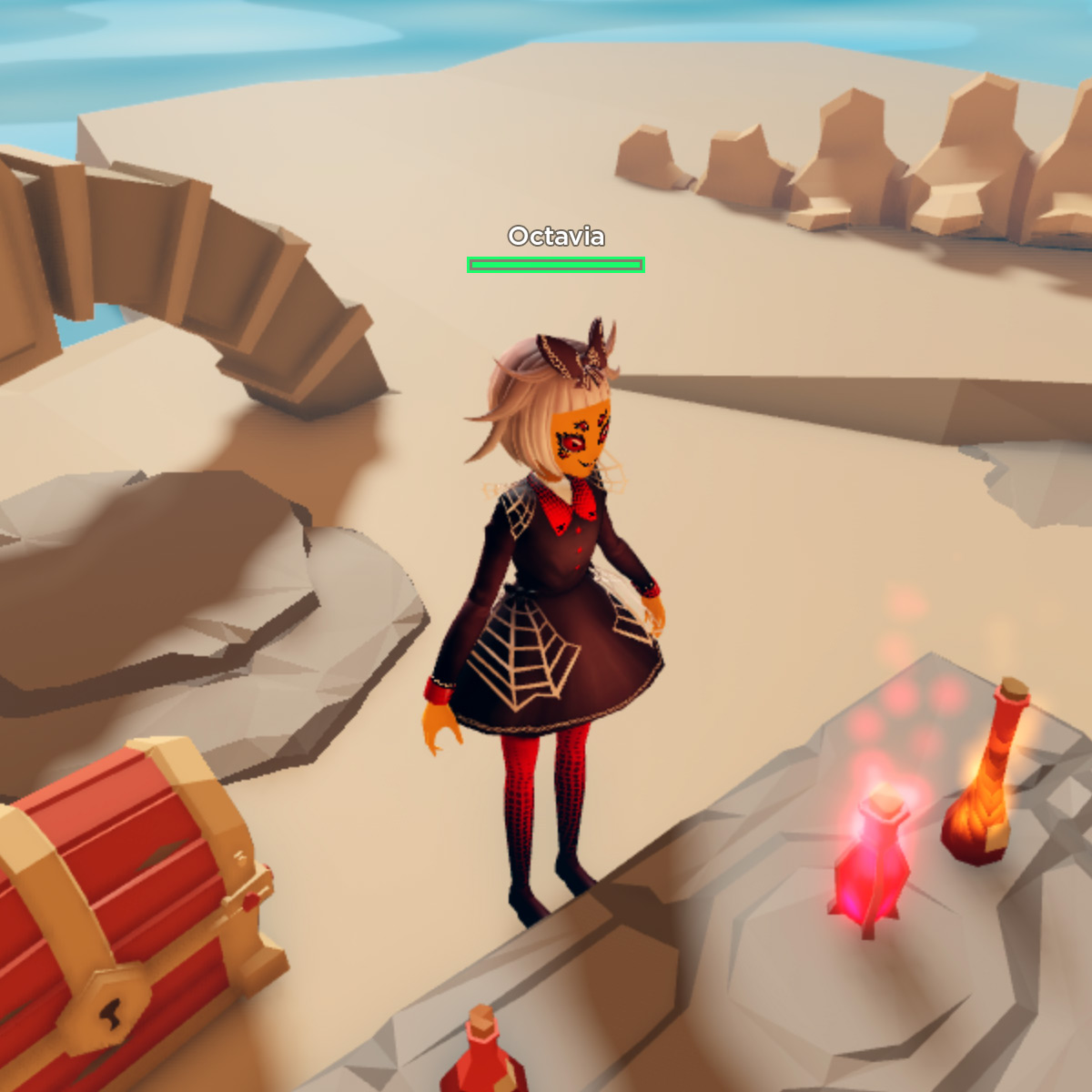 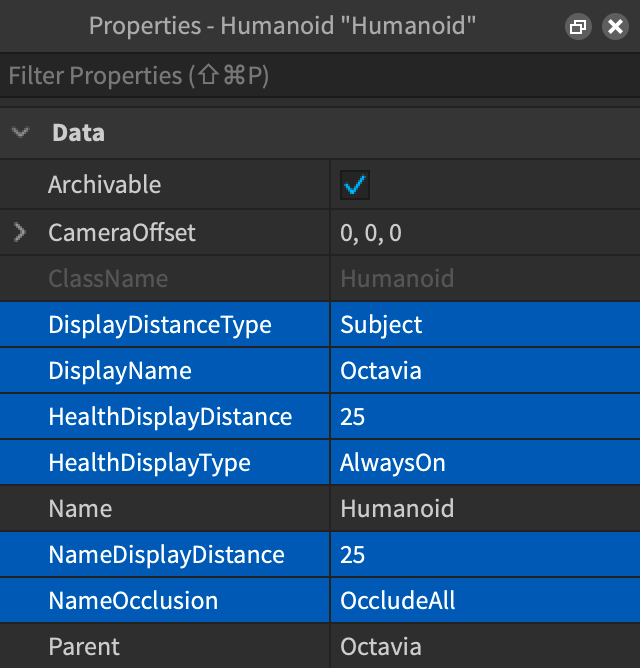 By default, a humanoid's display name matches the user's Roblox account Display Name which is unique and separate from their account Username. To show a fully custom name that's unrelated to the user's account, you can override the Humanoid.DisplayName property.

You can set the DisplayName property of any Humanoid instance which you gain reference to through a Script, such as the team customization example, or directly on an NPC character's Humanoid object.

In some genres like roleplaying or fighting, you may want to provide a method for users to input their own character name, pet character name, etc. which is specific to the experience and isn't tied to their account display name.

You can gather this input on the client side through a TextBox name entry or whatever suits the experience's interface, then pass it to the server with a remote event. On the server side, you can listen for the remote event and assign the filtered name to the user character's Humanoid.